Commonly Found Poisonous Plants and How to Identify Them

There’s nothing quite like the great outdoors, especially in the springtime.

Everything’s green. Animals are waking from their winter slumbers, ready to frolic and play. Birds are returning, their songs like whistles in the air. The summer’s warmth is slowly rolling in, making the days warm but not too hot, perfect for hiking. And yet the coolness of winter hangs on like a memory, whisking in the breeze, creeping in at night, making campfires a requirement when sleeping or hanging out outside.

But as anyone who’s ventured outside understands, it’s not all fun and games when you’re exploring amongst the birds, bees, squirrels, and trees. Whether you’re trekking through the woods or simply lazing about in your own backyard, there are things to watch out for, most notably poisonous flora.

Without a bark, bite, snarl, or growl, these pesky plants can creep up anywhere, and if you don’t know what to look for, then you could be in for a world of hurt—or at least a world of intense itching and scratching—if you’re not careful.

Here’s a list of some of the most commonly found, what they look like, where they grow, and how to get rid of them if you ever find them intruding into your backyard. 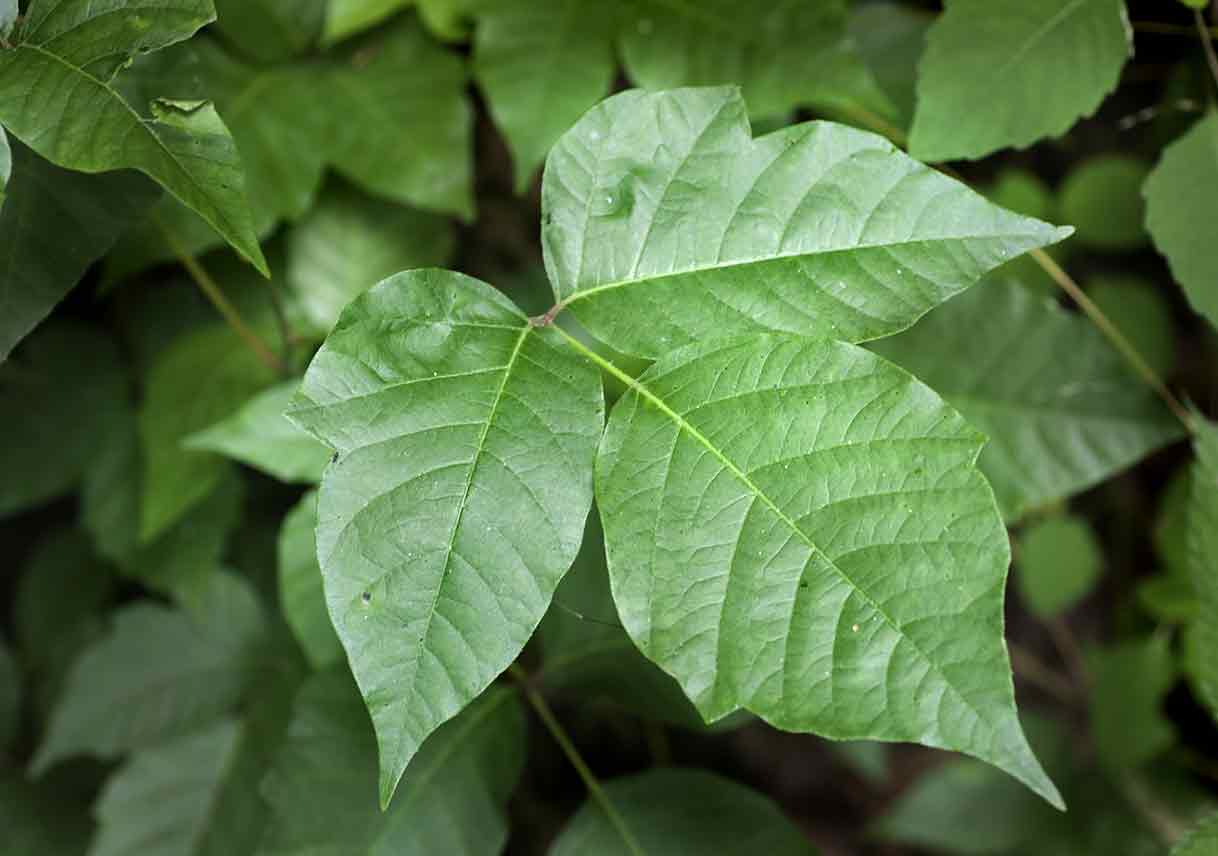 Everyone I know has a story about poison ivy. I, myself, once had to spend a week taking oatmeal baths every night just to get rid of the itchiness. The ubiquity of these stories goes to show that the stuff is almost everywhere and difficult to avoid.

Most know the rhyme, leaves of three, let it be, but does that include the whole plant or only parts of it? And what other signs are there that point to a plant being poison ivy?

Here’s a list of telltale signs that’ll help you understand.

As far as where these menacing meanies might be found, different varieties exist all over the US, and they take the shape of a ground-crawling vine, a regular vine, or a bush—so beware! 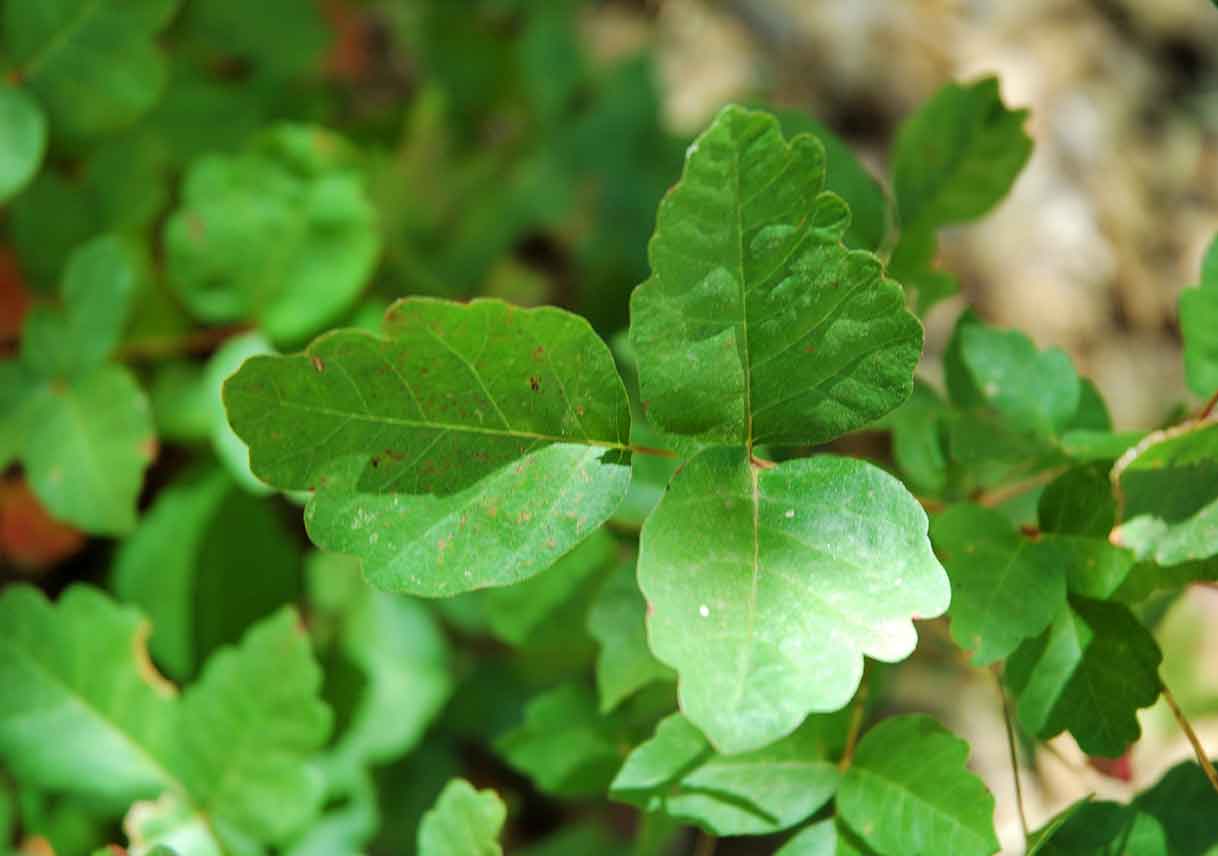 Poison oak shares a lot of the same characteristics as poison ivy. The leaves of three limerick still applies, it grows in both vine and bush form, and many of the telltale signs are the same, but this plant is much more deceptive than its cousin.

First of all, unlike poison ivy, the cluster of three leaves on poison oak can change shades—to a reddish brown—that better resembles that of the leaves and plants surrounding it, especially in the fall. The wavy contours of its leaves, and their adjoining berries, make it appear more like a regular plant as well.

Luckily though, poison oak only thrives on the West Coast and the Southeast, so all you midwesterners should be okay. 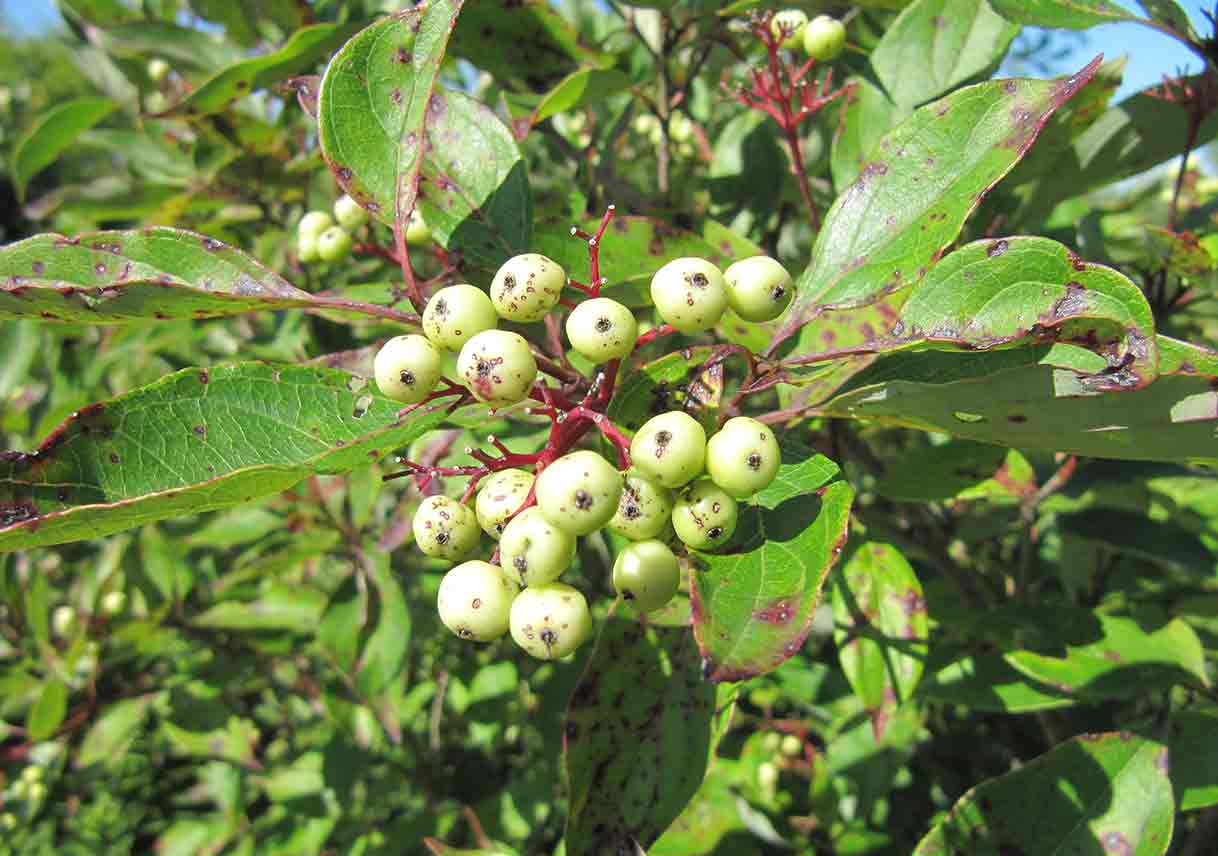 Rounding out the three plants with poison in the name, poison sumac just might be the most pernicious of the three since it’s the least distinctive.

Not only do its leaves change colors with the seasons, from the typical green, to red, to yellow, and even pinkish—much like poison oak and other, more regular plants—but there’s no real rhyme to help you identify it. (Unless you make up one of your own.)

Sure, there are three leaves at the end of each stem, but that’s the extent of the similarities. Instead, each stem grows between seven and thirteen leaflets, four to ten of which grow in parallel pairs—one on either side—as they run up.

The plant grows in bush form, almost like a fern, and is sometimes found with pale yellow or cream-colored berries. Poison sumac is most commonly found on the East Coast, in several southern states, and within parts of the Midwest. 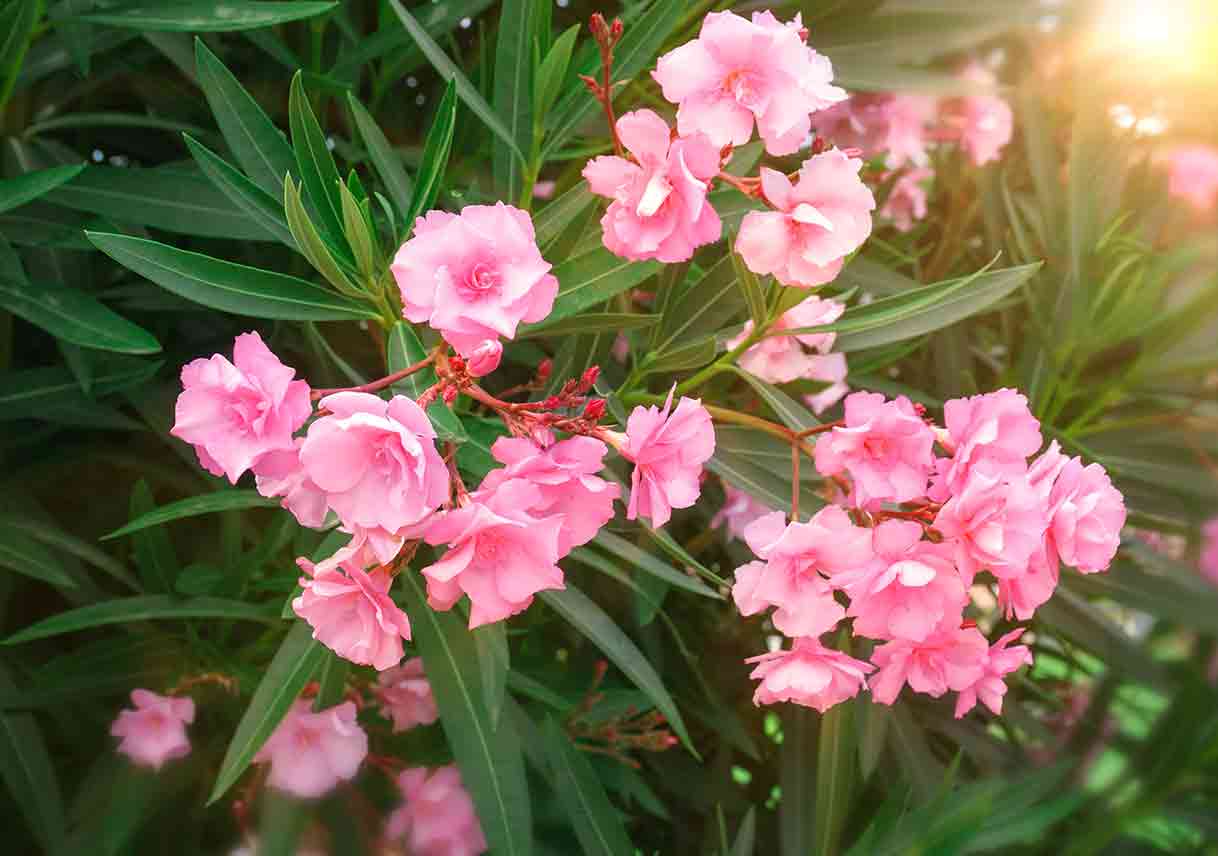 I included Oleander on this list, not because it’s commonly found in the US—it’s not even native to the area—but because it’s a rather popular plant used on both commercial and residential properties. Oh, and it’s also incredibly poisonous.

But no need to worry, it won’t produce a rash or make you want to run a rake across your skin, as it only harms when it’s eaten, so you’ll want to be wary about planting it if you have small children or anything else that likes to snack on things outside, as even a little nibble on the plant’s berries, stems, or leaves can lead to cardiac arrest and hospitalization.

With long, slender, dark green leaves and fragrant flowers of white, pink, red, or yellow, Oleander can grow to be a bush or a rather tall tree. And though it’s not native to North America, it’s most commonly found on the southernmost tips of the United States and along the West Coast. 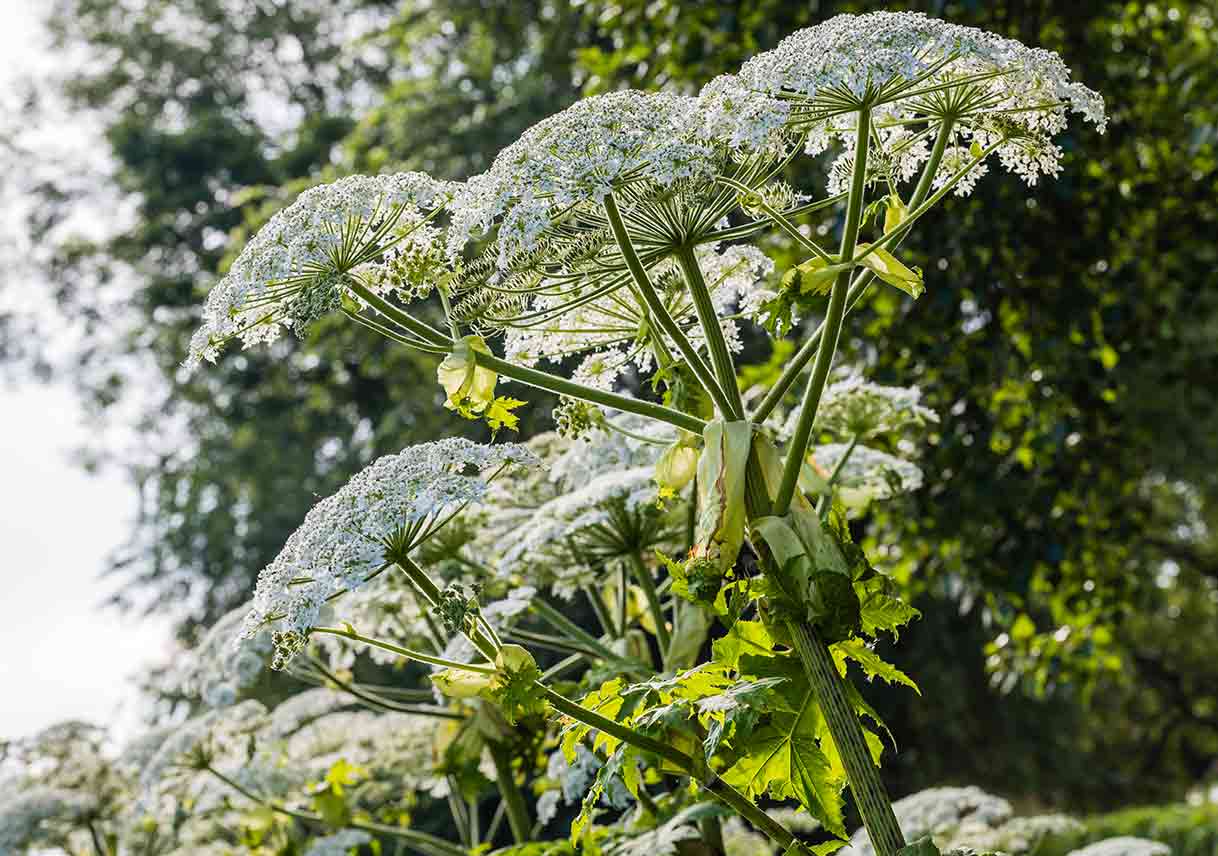 Much like Oleander, Giant Hogweed isn’t nearly as prevalent as poison ivy, oak, or sumac, but it’s undoubtedly one of the most dangerous plants you can come across, so it’s worth mentioning.

How dangerous is it? Well, the Department of Environmental Conservation has a special hotline you can call if you ever come across it, as its sap contains a toxin that, when exposed to the sun and human skin, can cause intense blistering that can last anywhere from a few months up to six years. (And if it comes into contact with your eyes, it can even cause blindness!)

Found in the carrot family of all things, and Federally listed as a noxious weed, the giant hogweed has a distinctive white flowerhead, reddish-purple blotches and spots on its leaves, and it can grow to a height of at least fourteen feet, so at least it’s easy to spot.

Hailing from the Caucasus Mountains between the Black and Caspian Seas, it currently resides in the northeastern United States.

Poisonous Plants: What Do I Do? 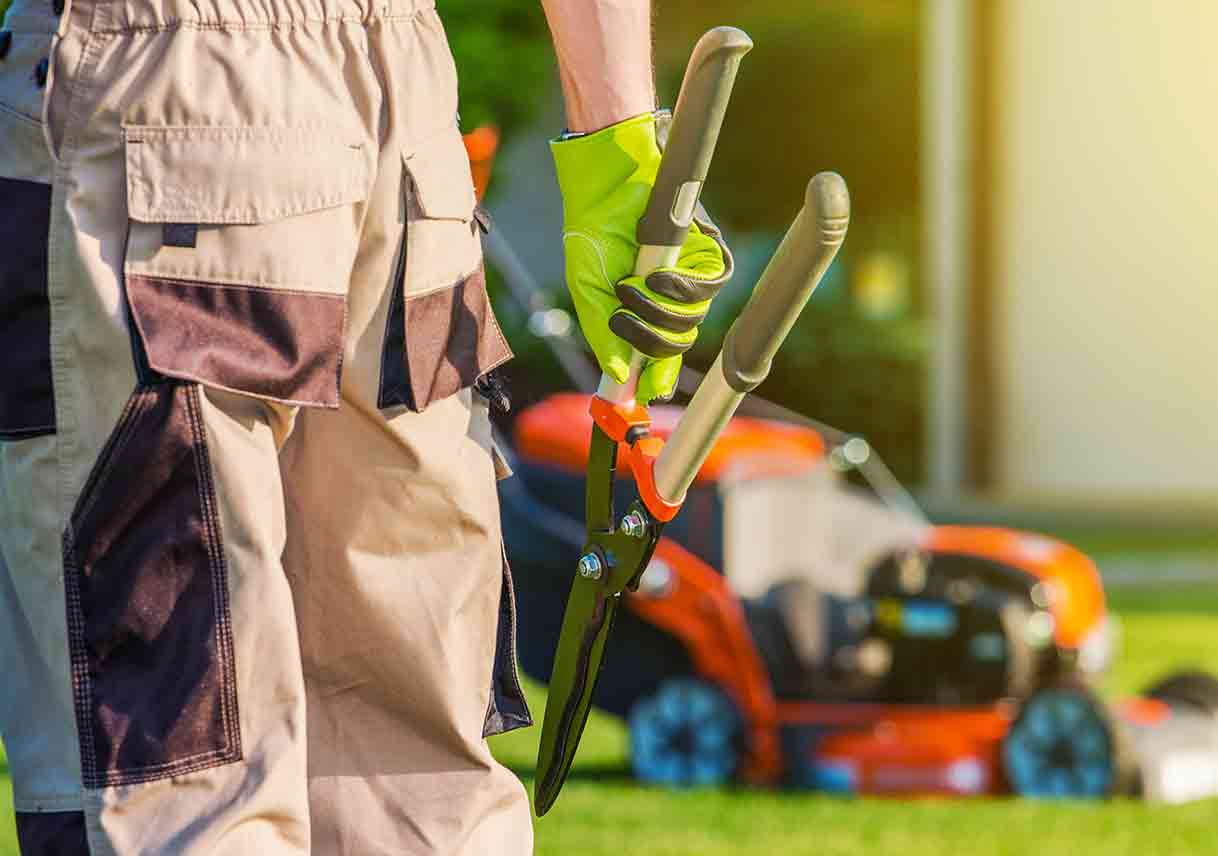 I’m not going to lie to you, there’s no easy, do-it-yourself solution for getting rid of poisonous weeds and plants, regardless of whether they’re deadly or just annoying.

Because even if you throw on a hazmat suit and attack it with a 20-foot pole, you still have to take the hazmat suit off and put the pole away, which means potential exposure to the plant’s oils and sap—which are inarguably the worst parts you can come into contact with.

And don’t even think about burning it. That’s literally the worst thing you can do, as all the bad parts of the plant then become airborne and can invade into your lungs and throat, which is even worse than merely being exposed to its insides.

All I can tell you to do is to contact a lawn maintenance specialist, especially if you find the stuff around your yard. Because, while you may be itching to spend some time outside, you don’t want to literally be itching once you’re there. But, hey, at least you know what to look for.