A place of seemingly infinite energy—in spirit, style, and substance—Houston is the hallmark of what it means to marry culture, commerce, and creativity in the Southwestern US.
Read more about Houston.
AIR
CONDITIONING
& HEATING

I think Best Pick Reports is why I chose the contractor I used. People like to have something that they can trust because there are so many companies in Houston, we don't know what to pick. The book helps.

Best Pick Reports is good. It's a good reference for finding contractors that are in the area

What I like about the book is that I think it saves me a lot of steps. I feel that if you've got a company in there, they're probably worth using, and I don't have to do so much legwork on checking around for contractors.

I've used the book now for a couple of projects at my house. All of your guys have been good.

I've used several companies out of Best Pick Reports, I know, and they've all been good. The book is extremely helpful. I go there first for everything.

We like the book very much because we feel like any services that we may need, we've got Best Pick Reports as a reference. We're really happy with it.

We're new to this particular area of Houston. When we needed work at the house, we said, 'Let's take these people in this book and just try them out first.' We did, and we were ecstatic. We were pleased with your publication. When we do anything else, we'll look at that book first.

The book is how I picked quite a few of our service people. I've had good experiences with the companies I've picked from the Best Pick Reports.

I used to have an online service where I paid them for references. When I saw your book, I immediately called the online company and cancelled my subscription. It's really nice to have Best Pick Reports because the book contained everything I needed. You get input from local people to comprise your ratings.

I think Best Pick Reports is great. We always keep it in the case that we have something come up. It's helpful, especially moving to a new area and really not knowing who to call. That's why we keep the tear-out of names and numbers on the side the fridge.

We received a copy of Best Pick Reports in the mail, and I kept it. The book was helpful for us. I can go through there and look at the different companies that we might need. I am hanging onto the book for down the road because it was very handy to have an independent firm doing this work. These ratings have something behind them, so it was very helpful.

Best Pick Reports really helped me out. I've used people listed in the book and had a good experience working with them.

This book is awesome. It saved me the day that I had an emergency and needed to find someone quickly. I love it, and I think it's a great book. It showed up in the nick of time.

I got the company I hired from the book. That's where I got the information about them. They were excellent, so I'll always use that book when I need services. I trust Best Pick Reports' judgment.

It's absolutely a good tool for finding companies to use. We're first-time homeowners, and we're new to Houston, so we don't go by referrals. Having Best Pick Reports was definitely a big help, absolutely.

We have the book in my kitchen cabinet, and I keep it exactly where it is because we referred to it. We're very appreciative of that book. I like the service Best Pick Reports provides, having other customers saying what the company did for them.

We've used the book three times, and we found really good folks in there. We've been very pleased with it. Any time something comes up, we'll look in there.

I think the book is a good source of information when I'm looking to do some home improvements.

If the number of nicknames measured a city, Houston, Texas, would be at the very top. Though it only possesses one official alias, "Space City", because of its longstanding commitment to space exploration—including being the base for NASA’s historic Manned Spacecraft Center—thanks to the area’s growing prosperity in the avenues of energy, trade, commerce, music, and the arts, the city has since collected a wide array of unofficial aliases, each based on a number of its major accomplishments.

With a population of 2.2 million and rising, "Hustle-town"—known as such for being an international hub of commerce and trade, as well as a purveyor of modern music and art—has become one of the fastest-growing cities in the United States. The "Bayou City", as it’s also known, with its intricate waterway system, major trucking and railway systems, and its three major airports, plays host to 23 Fortune 500 companies, over 600 trucking firms, and more than 40 colleges, universities, and institutions. In fact, only 21 countries other than the US have a GDP exceeding that of Houston’s regional gross area product.

But above being named "Clutch City" in honor of its multi-championship-winning Houston Rockets, or "Crush City" in honor of its homerun-hitting Houston Astros, and above it being called "The Magnolia City" thanks to its natural beauty, or "The Big Heart" thanks to its major contributions to Louisiana after Hurricane Katrina, the moniker that moves the needle most for many Houstonians—economically speaking, at least—is that of being "The Energy Capital of the World". And with more than 5,000 energy-related firms in its midst, from oil and gas exploration to its more recent endeavors in solar energy, it’s no small wonder why. 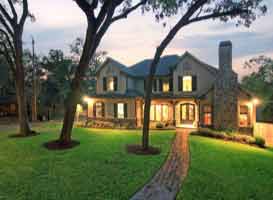 Thanks to a lack of zoning laws, the city of Houston, especially the area within the 610 loop, can be described as a neighborhood full of skyscrapers. You can walk a block to the local car dealership, hop off the porch and already be at the local bar, or relax in the backyard of your standalone home with a backdrop of the city’s skyline staring down at you.

What with the boom of local industry and rising traffic concerns, many are finding it wise to live closer to the city’s center, especially that of the trendier west side. Townhomes and condos are quickly becoming a popular trend, and some of Houston’s other inner-city areas are being looked at for revitalization efforts.

However, for the money, many are willing to swallow a long, traffic-filled commute for the opportunity to live in one of Greater Houston’s growing suburbs. A trip along I-10 or up US-290 and you’ll find neighborhoods aplenty offering more home and increased comfort for well below the price of the same inside the loop.

The great state of Texas knows all too well the affects that weather can have on a home. For the longest time, Houstonians worried most about the heat. Pool construction and maintenance, outdoor living amenities—i.e. decks, patios, and outdoor kitchens—and A/C inspection and repair are what concerned most citizens.

But these days, with the pendulum swing of droughts and rain, Houston residents are growing increasingly worried about the effects of flooding on their businesses and homes, which means foundation maintenance and repair and water damage and mold restoration are quickly becoming necessary services for the health and well-being of both newer and older homes.

However, not all home improvements are done in the vein of rain these days. Thanks to the rebounding economy, many in Houston are finding the time and the money to refurbish old homes, add on to new ones, and make the upgrades and improvements they’ve been dreaming of for a long, long time.

Whether you’re expanding your home, updating its style, or just trying to keep it functional, clean, and worry-free, it’s important to hire someone who knows what they’re doing. That’s why, in order to save you time, money, and energy, we take our time vetting and verifying each and every contractor in our guide and on our website before guaranteeing their work and granting them the official title of Best Pick.

For more information on the permits, licensing, and insurance required to begin, implement, and complete a home improvement project, please see the section below.

The state of Texas only requires licensing for specialty services, including HVAC, electrical, plumbing, pest control, and security systems, among others. For more information on the types of licensing required, and for a broader list of services, please visit the Texas Department of Licensing and Regulation.

For information on citywide permits, as well as a county by county breakdown of the Greater Houston area, please follow the available links.

Texas is the only state that does not require Workers’ Compensation insurance. General liability insurance, however, is required.