Home to America’s largest state fair, "America's team," and a booming metropolitan population, Dallas and its cowboy culture mark the shining star of the Southwestern US.
Read more about Dallas.
AIR
CONDITIONING
& HEATING

I think it's awesome. I've used it, and I thought it was great, especially since the recommendations are based off other peoples' referrals and experiences in our area.

I appreciate your report. When I have a problem, I want to get it fixed. I want a person to talk to. I'm not the kind of person who likes to do a lot of research to try to figure out who I'm going to use. I don't want to have to go through the phone book or the internet. So the fact that you guys have it already compiled the companies for me, I applaud that.

I use the book, and I appreciate it. That's where I got my roofer from. I'm very impressed with Best Pick Reports, and I will continue using it. I recommend other folks around to use it also, and I've referred people to companies I found in your book.

Your report's sort of my go-to book; it's helpful to me. It's well organized, and I have used your recommendations for basically everything. The guys that are in Best Pick Reports are the guys with the best reputations.

I really appreciate Best Pick Reports doing this. You're really trying to make sure the people you recommend are good folks. I can have more confidence that when I call a contractor, it's not somebody who's just paying to get their name in. That's great.

It's nice that you keep your sections fine-tuned with just a couple of providers. Those companies are all going to be top-notch. There's always so many contractors to choose from out there, so I'd rather have somebody with good resources narrow it down for me. That's what I like about Best Pick Reports.

We like the publication a lot. We're new to the area as of about February of last year, so having Best Pick Reports was immensely helpful.

It gives local homeowners a review of people that have done work in the area. It's kind of a quick snapshot into a lot of the contractors out there. I like it a lot. There are lots of folks in those industries, so Best Pick Reports streamlines making a choice a lot quicker than just trying to go through a phone book.

I've had good success using Best Pick Reports to find contractors for various things and bring folks in to do work. I've been pleased with the times I've used it.

I like the book. Actually, I use it all the time. When I need a company, I look at Best Pick Reports first.

I just moved here, so I don't really know too many companies out here yet. We've used a couple people out of your book, and we've been very impressed with all of them, very happy; roofers, sprinklers, and others too. We're very impressed with everybody out of this book.

I'm thankful for that book. I just love it. I've used quite a few of the recommendations. I'm very pleased. My son-in-law told me about the book. I hadn't known which contractors to get, and we're in a different area than where we used to live. The book was so helpful.

I look forward to getting Best Pick Reports in the mail. It's been very helpful, and I'm going to be using it to call companies this summer.

That's where I started calling my people from. It's been very helpful, and I like the comments from other folks. If it's me, and I'm looking for a contractor, I want one that I know has been in this area for a while. These companies will be here if I need to call them down the road. That's a benefit with your book that makes me feel comfortable.

Our homeowners' association gave me a copy of Best Pick Reports. I think it's a great help, and I found a plumbing company in there. It definitely takes out the guesswork with some things about finding a contractor. It's comforting to know that someone's kind of got your best interests in mind.

I was glad to have Best Pick Reports. It was in the mail box when we moved in our house, and we had utter chaos. When something went wrong with the house, I said, 'Get that book and find a company and call them.' We were glad to have somebody to call in that kind of situation. And we've referred to it a lot.

I love this book; I get all of my workers out of it. Whenever I have a home problem, I go to Best Pick Reports first. I didn't use the book to find a lawn service, and I've regretted it.

I saw Best Pick Reports recently, and I recognized some of the business in there, but not a lot of them. It was good. There are a lot of smaller businesses I've never heard of that made their way into the report, and that helps me because I like to try to pick local companies.

I think Best Pick Reports is great. It was really nice to have a list of possible providers if we needed someone. We're in a new home, and nice it's to have this resource.

I got the new edition of Best Pick Reports last week, and it comes in handy. I'm fairly new to Dallas, so it's been very helpful to have this book. When I need any work done at the house, I just go to the report.

Starting out as a simple trading post for early American migration into the west, Dallas has long been a beneficiary of its prime geographical location. Connecting the east to the west and the north to the central parts of the south—initially through rail and now through four major interstate highways and a pair of major airports—it’s no wonder why Dallas has grown to become one of the most vibrant, well-known cities in the US of A.

Home to the Cowboy in mindset, style, and in sports, Dallas has long cultivated an eclectic mix of southwestern traditions, big foods, modern art, premiere architecture, and Mexican-American culture. The city’s population is ninth-largest in the US, with over 1.2 million residents. It is home to five of the most celebrated sports teams in the country, including the Stars, Mavericks, Rangers, and Cowboys. And it plays host to America’s largest and longest-running fair, the Texas State Fair, that sees millions of people celebrating Texas culture every year and enjoying the kinds of attractions, entertainment, and culinary treats that only the Dallas area can provide.

Once a land of oil and cotton, Dallas has since established itself as an epicenter of industry, finance, science, and big business. It’s a southern hub for Fortune 500 companies, claiming 4 of the top 100, and more than 20 overall, and it’s currently ranked 12th on the Forbes List for Job Growth and 10th for Best Places for Business and Careers.

Easy Living and Affordable Housing in The Metroplex 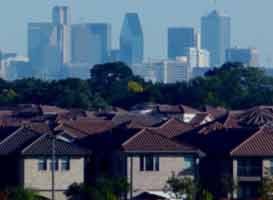 In addition to being a major player in the Southern United States, the city of Dallas also acts as the heart of one of the largest metropolitan areas in the country. Dallas-Fort Worth (DFW), otherwise known as The Metroplex, encompasses the better part of five Texas counties, including Denton, Collin, Rockwall, Dallas, and Tarrant, and touts a staggering 2.3 million households and 7 million-plus people, making it the fastest-growing US metro in the last 10 years.

Such a statistic is not that surprising, however, when you take into consideration DFW’s more-than-affordable median home value ($205,000), its higher-than-national-average median household income ($59,946), and the fact that unemployment (3.7 percent) and cost-of-living (101 based on COLI) remain low or around average, especially when compared to other major metropolitan areas.

Ranch-style homes remain the mainstay in much of DFW, but Cape Cod, colonial, contemporary, and modern-style homes can be found here and there in various areas, offering residents—especially those in the suburban areas—a measured mix of size, style, value, and affordability.

No matter the style of home, living in DFW comes with its own set of home improvement projects and requirements, and studies show that homeowners in the DFW area spend more time working on their homes than those in other areas.

With clay soil, flat land, and with droughts and floods becoming about as common as brisket and white bread, roofs, yards, and foundations are suffering, and as a result, inspections, repairs, and refurbishments are on the rise.

And then there’s the heat. For a state that sees some of the hottest temperatures in the country, HVAC and pool maintenance services are a speed-dial requirement in DFW. And to better enjoy the barbecue, many are adding outdoor living spaces onto their homes in the form of decks, patios, and outdoor kitchens. Landscaping and frequent lawn care are also key to keeping trees and lawns looking neat and trim—which is a matter of pride in some Texas neighborhoods.

Whatever the project, hiring a valued professional should be easy and worry-free. Because the right contractor can not only save you time, money, and energy, but they can provide the peace of mind of a job done right. That’s why we take the time to verify all our contractors and guarantee their work before certifying them as an official Best Pick.

For more information on permits, licensing, and insurance requirements in the Lone Star State, please see the following section.

The state of Texas only requires contractors to obtain licensing for specialty services, including HVAC, plumbing, electrical, lawn treatment, mosquito control, and security systems, among others. For more information on the types of licensing required, and for a broader list of services, please visit the Texas Department of Licensing and Regulation.

For city by city and county by country permit restrictions, please follow the available links.

Texas is the only state in the US that does not require Workers’ Compensation insurance. However, general liability insurance is required.