Arguably the heart of New England and one of the oldest cities in the United States, Boston has a long, rich history befitting one of America’s great cities.
Read more about Boston.
AIR
CONDITIONING
& HEATING

I think Best Pick Reports is a good reference tool for homeowners like myself. That's how we found our roofers.

I used one of the people you recommended for paving. And I probably wouldn't have reached out to them if it weren't for your report; I'm very happy. I appreciate the help Best Pick Reports gives me.

I think it's good for this area because you're always looking for good-quality recommendations for companies you can trust.

I think Best Pick Reports is great. It was really nice to have a list of possible providers if we needed someone. We're in a new home, and nice it's to have this resource.

Whenever I need a contractor, I call the guys EBSCO Research recommends. I don't keep information from companies themselves, but I always keep Best Pick Reports.

I think it's awesome. I've used it, and I thought it was great, especially since the recommendations are based off other peoples' referrals and experiences in our area.

As a homeowner, I'm always looking for somebody that can give me a view on service providers. I think it's important to have that. Best Pick Reports is a good tool.

It gives local homeowners a review of people who have done work in the area. It's kind of a quick snapshot into a lot of the contractors out there. I like it a lot. There are lots of people in those industries, so Best Pick Reports streamlines making a choice a lot quicker than just trying to go through a phone book.

It's nice that you keep your sections fine-tuned with just a couple of providers. Those companies are all going to be top-notch. There's always so many contractors to choose from out there, so I'd rather have somebody with good resources narrow it down for me. That's what I like about Best Pick Reports.

I really appreciate Best Pick Reports doing this. You're really trying to make sure the people you recommend are good folks. I can have more confidence that when I call a contractor, it's not somebody who's just paying to get their name in. That's great.

I saw Best Pick Reports recently, and I recognized some of the business in there, but not a lot of them. It was good. There are a lot of smaller businesses I've never heard of that made their way into the report, and that helps me because I like to try to pick local companies.

I have used Best Pick Reports. There's just a few entries in each category, and the people you put in there are really good. Keep it small and simple. Quality is the key. Perfect.

Everything's good about Best Pick Reports. You had good ratings in there and good feedback from people that've used the companies. It gives me a better idea of who to pick based on those past experiences. And that's the best way to find a company: by referral and from someone who's done research on them.

Best Pick Reports is good. It's a good reference for finding contractors that are in the area.

Arguably the heart of New England and one of the oldest cites in the United States, Boston has a long, rich history befitting one of America’s great cities.

Modest monikers like "Athens of America" and "Intellectual Capital of the United States" give a sense of how important a role Boston has played in shaping the United States’ history and culture. However, nonickname quite captures how consequential the city is better than "The Hub"—short for possibly the greatest nickname for any place ever, "The Hub of the Universe". Go big or go home, right?

Despite being nearly 400 years old, Boston is a fairly young city; the metro’s many colleges and universities bring massive numbers of students to the region. Between its world-renowned educational institutions, plentiful tourist attractions, lively nightlife, concerts large and small, and multiple championship sports franchises, Greater Boston has more than a little of something for everyone; young, old, or in between.

The robust—though at times inconvenient—transit system along with the incredible walkability of the region mean that car ownership is not a foregone conclusion, unlike in many other cities. In recent years, many of those cities have embarked on ambitious plans to create walkable spaces and communities, and it’s not hard to imagine that Boston is what they aspire to.

Though the metro area’s population isn’t seeing the same kind of year-over-year growth as other large metros, it still ranks as one of the ten largest in the country. Greater Boston is anything but stagnant; Boston and nearby Cambridge routinely make annual "best places to live" lists, and with so much to offer, there’s little question why. Other primary cities in Greater Boston include Lowell, Quincy, and Worcester, and the region itself is primarily made up of five Massachusetts counties: Suffolk, Norfolk, Plymouth, Middlesex, and Essex. 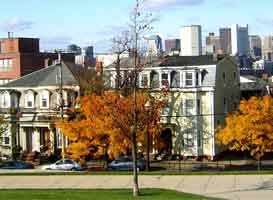 Sometimes referred to as a "City of Neighborhoods", Boston proper has many neighborhoods—23, officially—each with their own unique personalities that have developed over its long history. Add the surrounding cities and suburbs in the metro, and you have an array of communities with a surprising diversity, both economic and cultural.

However, the Boston area’s high quality of life does come at a price; it has one of the highest costs of living in the US. As the economy has improved, median home values in Greater Boston have soared in recent years, reaching $420,000 in early 2017—towering more than $100,000 above post-recession lows.

Despite this, there’s a great degree of variability in home prices, with communities along the I-95 corridor and closer to downtown Boston significantly outpacing cities and suburbs farther from Boston’s core.

Boston’s climate ensures that residents get to enjoy all four seasons, though "enjoy" may be stretching it in some cases. With the city’s average annual snowfall reaching nearly 44 inches (potentially 100+ in extreme years) and temperatures that can reach the century mark at the height of summer, homes inGreater Boston have to endure extremes on both ends.

Several feet of snow each winter means that neglecting roof maintenance and gutter cleaning can cause big problems for your home down the line. Poor insulation or clogged gutters can lead to ice dam formation, which then creates a possible risk of water damage to the interior of your home.

Central air is far from ubiquitous in this part of the country, but a fully functioning heating system is absolutely essential. Making sure that maintenance and any necessary repairs are performed long before the first snowfall is the best way to protect yourself from uncomfortable and potentially dangerous winter nights.

Given the climate, it’s no surprise that contractors providing roofing, snow removal, heating and air conditioning, or insulation services are likely to have a steady stream of customers in peak season. Getting work done in advance and in the off season is advised; no one wants a leaky roof when two feet of snow is in the forecast.

Every Best Pick company must meet the licensing and insurance requirements of the areas where they perform work in addition to carrying general liability insurance coverage.

In Massachusetts, most home improvement contractors must be registered with the state in order for homeowners to be eligible for protection under the state’s Home Improvement Contractor Law. However, the Massachusetts Office of Consumer Affairs & Business Regulation states that contractors performing certain types of work are exempt from this requirement, including installers or providers of the following:

Certain licensed professionals—such as architects, electricians, and plumbers—who provide services that are exclusively within the scope of their profession as well as some part-time and small-job (under $500) contractors do not need to be registered.

Depending on the type of work you’re having performed, you may need to apply for a building permit with your city. Permits allow local governments to keep communities safe and ensure compliance with state construction codes.