I'm very thankful for Best Pick Reports. When I have a major job to do, like a deck or a floor or something, I always look through that book first. I always use them because I trust them to be neutral and honest.

I'll be using Best Pick Reports for all the work I need done. I use it, and I love it.

I just moved here, so I don't really know too many companies out here yet. We've used a couple people out of your book, and we've been very impressed with all of them, very happy; roofers, sprinklers, and others too. We're very impressed with everybody out of this book.

I keep the book and look at it all the time. Phenomenal. Wonderful research.

Our homeowners' association gave me a copy of Best Pick Reports. I think it's a great help, and I found a plumbing company in there. It definitely takes out the guesswork with some things about finding a contractor. It's comforting to know that someone's kind of got your best interests in mind.

I used Best Pick Reports for many things; for tree removal, plumbing, and other things. It's excellent, terrific. I'm so glad that I got it, and I will continue to use it year after year.

This book is awesome. It saved me the day that I had an emergency and needed to find someone quickly. I love it, and I think it's a great book. It showed up in the nick of time.

I am grateful for the book. It's so helpful for us when we're looking for reputable people. We are new to the area, so it was hard to know who to choose, and this book gave us a great place to start.

I've used several companies out of Best Pick Reports, I know, and they've all been good. The book is extremely helpful. I go there first for everything.

I love this book; I get all of my workers out of it. Whenever I have a home problem, I go to Best Pick Reports first. I didn't use the book to find a lawn service, and I've regretted it.

I was glad to have Best Pick Reports. It was in the mail box when we moved in our house, and we had utter chaos. When something went wrong with the house, I said, 'Get that book and find a company and call them.' We were glad to have somebody to call in that kind of situation. And we've referred to it a lot.

I can tell a lot of work goes into making this book. When I go online, I can find 50,000 plumbers, and I can't tell which ones are better than others. Best Pick Reports is quality over quantity; the companies in it are solid.

I use Best Pick companies a lot, and it's been brilliant. Every contractor I got out of the book has been really good.

We love Best Pick Reports. We use it for everything. It helps reduce our choices, which is great, especially when you're busy. It gives you some options, but you still feel safe no matter which one you pick. Keep your books coming.

What I like about the book is that I think it saves me a lot of steps. I feel that if you've got a company in there, they're probably worth using, and I don't have to do so much legwork on checking around for contractors.

Best Pick Reports is a good source. It beats just randomly trying to go through a phone book or the computer. I like the idea that people can't pay to be recommended. It's a good book, and I've used it.

Best Pick Reports was heaven-sent. The report had much better descriptions than any online services. I rate it an A+. It was great, and it really has saved us.

A slender strip of cities carved out from the wild landscape of the Everglades, the South Florida metropolitan area stretches along the Atlantic coast from northernmost West Palm Beach through Fort Lauderdale, Pompano Beach, and Boca Raton to vibrant, notorious Miami, earning its “Gold Coast” moniker from the marriage of glamorous urban centers to unbroken miles of pristine beach and the ritzy lifestyle of its residents.

Served by five interstate highways, three major airports, and the world’s busiest cruise ship port, South Florida welcomes a constant flow of travelers from around the globe, both as a destination hotspot and a gateway to the Caribbean. Snowbirds famously flock to the area for a winter respite, drawn to its tropical climate, sprawling beaches and golf courses, and sparkling street life.

In addition to tourists, South Florida is likewise attracting more and more permanent residents. Miami-Dade, Broward, and Palm Beach counties experienced rapid growth in recent years, surpassing a collective population of six million with no sign of slowing down. The vast majority of new residents hail from Caribbean and Latin American countries, all of whom contribute towhat some are calling South Florida’s cultural renaissance. 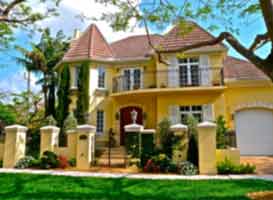 South Florida is currently the nation’s eighth largest metropolitan area, and with its numbers swiftly climbing, competition is steep for home buyers, particularly first timers. Mid-market homes fall between $300,000 and $600,000, and the number of these listings is dwindling.

Meanwhile, as single-family homes are spending less time with a For Sale sign in the yard, luxury condos are experiencing a lull in market activity, driving down prices in some of the nation’s priciest cities.

South Florida’s characteristically warm, humid weather persists year-round, and many homeowners celebrate the tropical climate by investing in their outdoor spaces. Landscaping and pool service companies are extremely busy during peak spring and summer months, so we encourage scheduling installations, renovations, and other work well in advance to ensure prompt service at the lowest rates.

Likewise, arranging a pre-season checkup with an air conditioning professional can help prevent a system failure during the hottest part of the year, when HVAC companies are in high demand.

South Florida weathers its fair share of hurricanes and tropical storms, so most window and door companies offer hurricane shutters and impact-resistant windows and doors, which are designed to protect against damage from wind, rain, and airborne debris. Should a natural disaster occur in your area, know the contact information of a qualified disaster restoration company. Quick action is key to preventing further damage and returning your home—and your life—to normal.

Working with a licensed, experienced contractor will save you time, money, and frustration. We verify every company we promote and guarantee their work, so you can hire an A-Rated Best Pick contractor with confidence.

All Best Pick companies must meet the insurance and license requirements of the areas they service, and they must also carry general liability insurance.

Licensing requirements in Florida vary depending on service category.

Most trade service contractors, such as electricians and plumbers, are required to hold either a state-issued license or a county-issued license that has been registered with the state. In general, contractors who provide home improvement services, like painters and flooring companies, will hold a license for each county they serve, although larger companies who operate across multiple areas have the option to carry a state-issued general contractor license.

Certain services, including housecleaning, landscaping, appliance repair, and energy audits, do not require a license. For more information, visit the website of your state or local government.