Are you tired of seeing the same run-of-the-mill doors everywhere in your home? Unless you request custom interior doors, a builder will usually install standard hinged doors, but that doesn’t mean you can’t change them out later. Consider incorporating some of the following interior door ideas into your next remodeling project.

Folding doors such as bifold and accordion doors are most commonly hung on doorways to closets and laundry rooms, but there’s no reason they can’t be used anywhere else in the house. Admittedly, some styles of folding doors are frustratingly easy to slide off their tracks, which can make them more of a hindrance than an entrance, but don’t discount them as an option all together—other styles are far less difficult to maneuver. Folding doors work especially well in places where you may want the doors to remain open yet out of the way fairly often, such as a doorway between a dining area and a family room or the entrance to a home office.

If your house suffers from narrow doorways or other tight spaces, consider installing pocket doors. Because it literally slides into a pocket in the wall, a pocket door can be used in a doorway where there wouldn’t be enough room for a hinged door to swing in either direction. Pocket doors are also an excellent alternative to folding doors if you want the ability to occasionally close off an entryway that you expect to leave open most of the time. 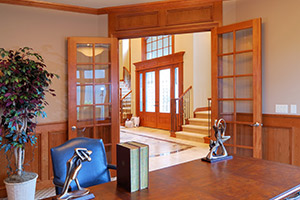 Although they probably aren’t the best choice for a bedroom, glass doors are a great option for areas of the home enjoyed by the whole family, including dining rooms and sunrooms. They’re also a fairly popular choice for home offices as well as contiguous rooms that may be used at the same time. For instance, glass doors between a sitting room and a dining area would allow guests to easily wander between rooms or to stay in one without feeling cut off from those in the other. 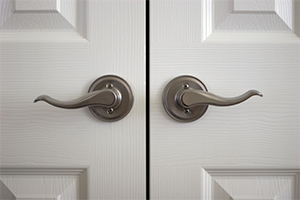 A sliding barn door isn’t so much a door as a hanging partition; it hangs from a glider that runs above the entryway and an adjoining wall, and it’s pushed in front of either the wall or the opening depending on whether you want it open or closed. Unlike pocket doors, sliding barn doors tend to be rather large and require quite a bit of unobstructed wall space.
There are infinite customization options for interior doors. For more inspiration, get in touch with a local Best Pick door and window company, and check back tomorrow for some exterior door ideas.