A Tree Limb Fell on Our Neighbor’s Property: Here’s What Happened Next

This is a personal account of what one might do when a large piece of a tree falls into a neighbor’s backyard. For a more professional account, you can read this article about fallen tree removal.

Picture this nightmare scenario. It’s 1:00 AM. You hear a sudden crack. It’s followed by a loud splitting sound that reminds you of rushing water—like a lot of rushing water. Your house begins to rumble and shake. You burst awake. The rumbling stops.

You rush outside to see what’s happened, and you find that the massive oak tree in your backyard has suddenly shed one of its longest and largest limbs. The bulk of it is laying in your neighbor’s backyard. There’s a small branch and some leaves on the roof, but most of it is spread across the ground. In fact, you can’t even see the ground anymore. That’s how big this limb is.

A section of your neighbor’s fence is in ruins. Their shed is still standing but severely damaged. No one’s hurt—thank goodness—but wow, what a mess.

Believe it or not, this happened to me. It happened just last week to be exact—my wife and I are still dealing with the aftermath of it all. We’re far from professionals, but I believe we handled it well. Here’s what we did—and some of what we learned—throughout this ridiculous experience. 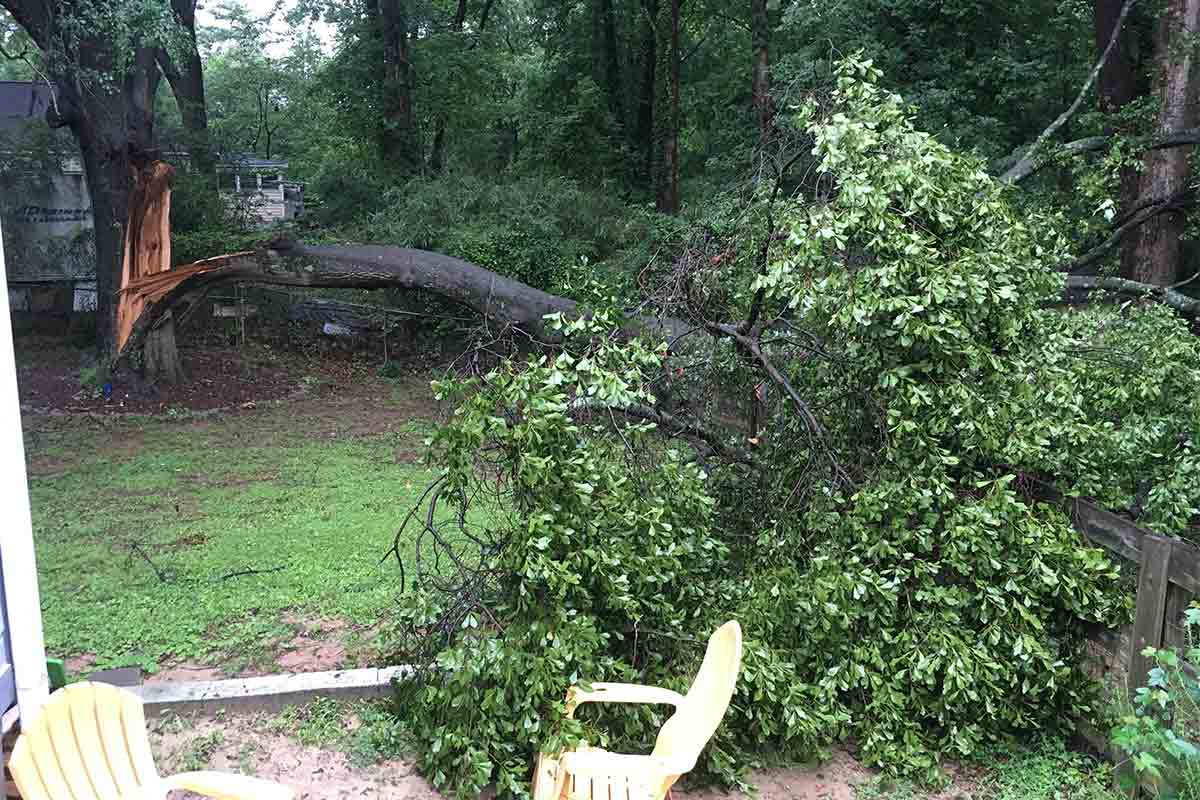 This was a difficult thing to do in the dead of night. Not only did we have to deal with the shock and awe of a fallen tree limb, but the darkness made for an uneasy investigation. We busted out the flashlights, met our neighbors outside, and tried to figure out what the heck just happened.

Much of our focus was on the neighbor’s home and the surrounding trees. There was one small branch clinging to the corner of the roof, but other than that, there was no real damage. The cypress tree next to the garage, however, had taken a pretty hard hit—and likely saved their kitchen from a cracked or smashed window—but there was no real threat of it falling over.

All in all, it looked okay. Their shed wasn’t well, and their fence was busted, but it was all okay considering the circumstances. We concocted half a plan, which basically amounted to “We’ll call you in the morning,” and then, satisfied with our weary-eyed investigation, we all went back inside.

Interesting Tip: That night our neighbor called an emergency tree service to see if we should be worried about any other trees coming down in the aftermath. Turns out, “domino effects are rare” in such instances.

This is my rule following any major incident, especially one where insurance might play a role. Get into a fender bender? Take a pic. Plumbing problems? Take a pic. Tree limb took a dive into your neighbor’s backyard? Take a pic from every conceivable angle.

Pictures allow you to back up your claims and clear up confusion—especially in the aftermath when everything’s been cleaned up. You can also share them online for second and third opinions. (And with smart phones and cloud storage, why not? It’s too easy.)

In fact, a single picture actually cleared up a problem for us very early on in the process. Apparently, if the tree had been unhealthy, and obviously so, my wife and I might have been liable for the damages. Luckily our neighbor snapped a pic, sent it to an arborist friend of hers, and learned that the tree was pretty healthy.

I can’t attest to how long our neighbor was on the phone with her insurance company or how long she spent with the claims person to figure out what would and wouldn’t be covered. What I can tell you is that the conversation we had with our insurance lasted about five whole minutes.

My wife told them what had happened, they asked her if any damage had been done to our property, my wife said no, and then that was that. There wasn’t anything we could do. We couldn’t even file a claim.

Step 4: Get a Quote from Both Sides 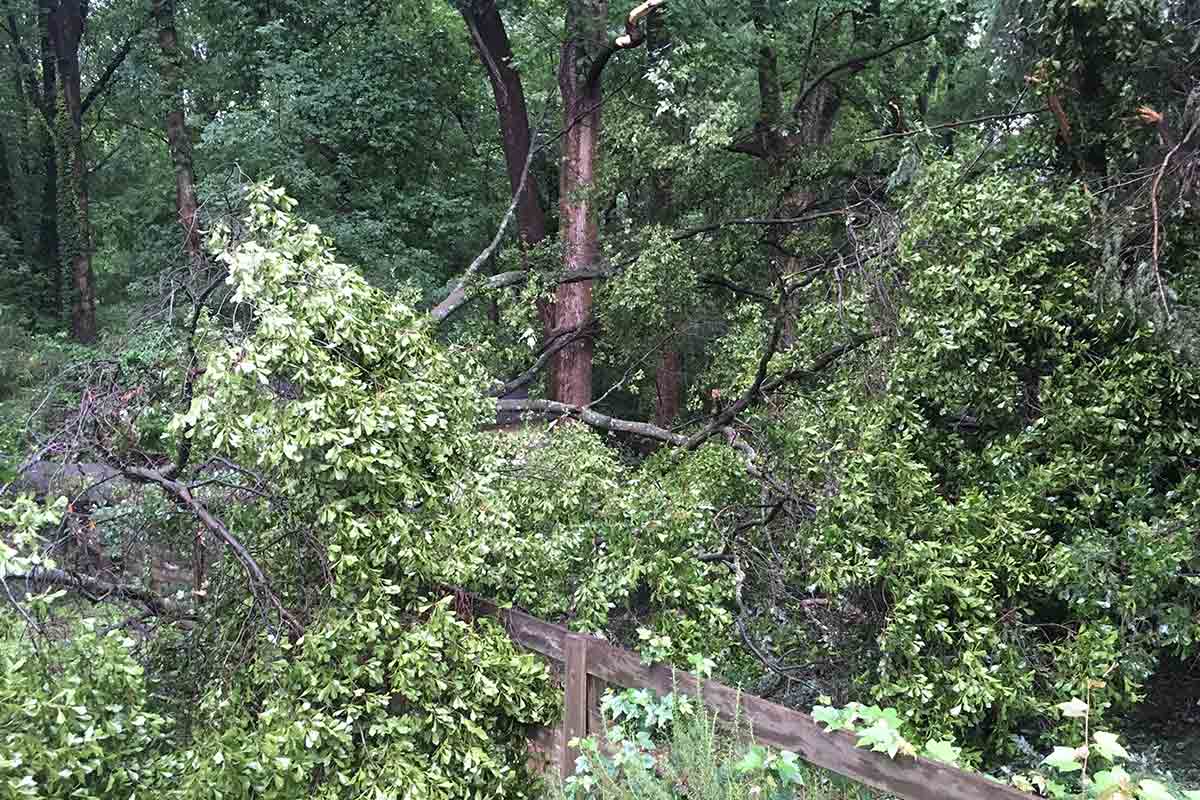 Funny thing about trees: If a tree or limb falls onto your neighbor’s property and damages it, your neighbor’s home insurance will pay for the damage as well as the cleanup; but only for their side. If you’re the owner of the tree and no physical damage was done—like to a home, a fence, or a shed—then the cleanup for your side is on you, as is the cost of removing the tree entirely.

As a result, I talked to two separate tree professionals on the day of the incident. The first guy came out on behalf of our neighbor. We walked the property, assessed the damage, and talked specifics. They said they could bring in a Bobcat and get it done in a day; seven to eight hours to be exact. (Which I thought was crazy fast, considering the amount of debris.)

The second guy came on behalf of my wife and I, and he said he could get it done in the same about of time but that he would use a crane. He said he could park a crane on the backside of our house, go over the powerlines, and reach all the way into the backyard to remove the broken tree limb. (Which I also thought was pretty amazing.)

My neighbor and I got quotes from both sides. We wanted to see which one was cheaper and whether we could get a discount for hiring one company to do all the work.

Step 5: Learn Everything You Can from the Arborists 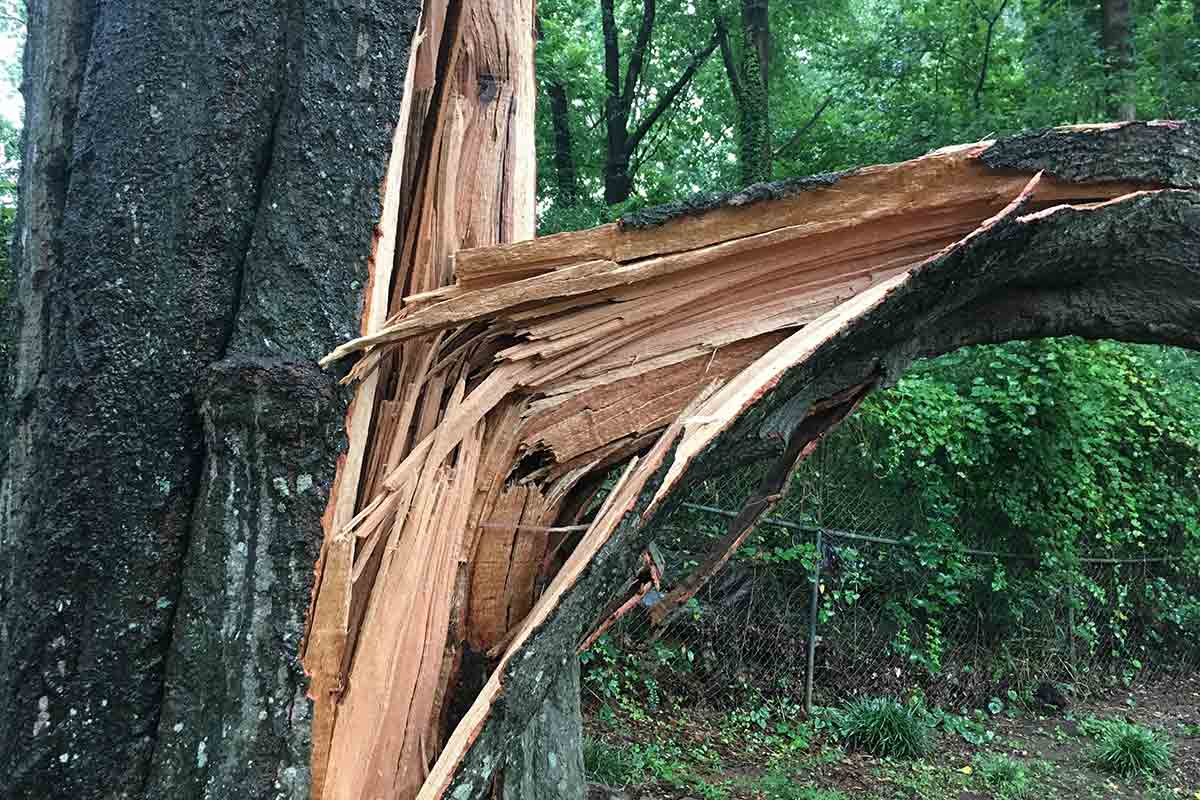 We live in Atlanta, and even though it’s a major metropolitan area, there are still a ridiculous number of trees. I had the ears and minds of two tree professionals, so I thought it was important to learn everything I could about why the tree limb fell in the first place and what I could do in the future to avoid a similar situation.

Here’s what I learned…

Less than two percent of fallen trees do damage to homes

A ten-year certified arborist told me this, and I find it absolutely astonishing and pretty darn comforting.

The limb was rotting, but there was no real way to predict the fall

Both men assessed that it was an otherwise healthy tree, but that water or debris had likely accumulated where the tree limb met the rest of the tree and created a wound. The wound grew worse over time, and even more so as it rained—and rained and rained and rained. (It’s been raining a lot here.)

Add the weight of the rainwater on the limb’s branches and leaves, along with the sizeable weight of the tree limb itself, and you have yourself a recipe for disaster. According to the arborist, there’s a device that could have detected rot in the tree’s limb, but it wouldn’t have told them that the limb was in danger of breaking off.

Step 6: Determine the Fate of Your Tree 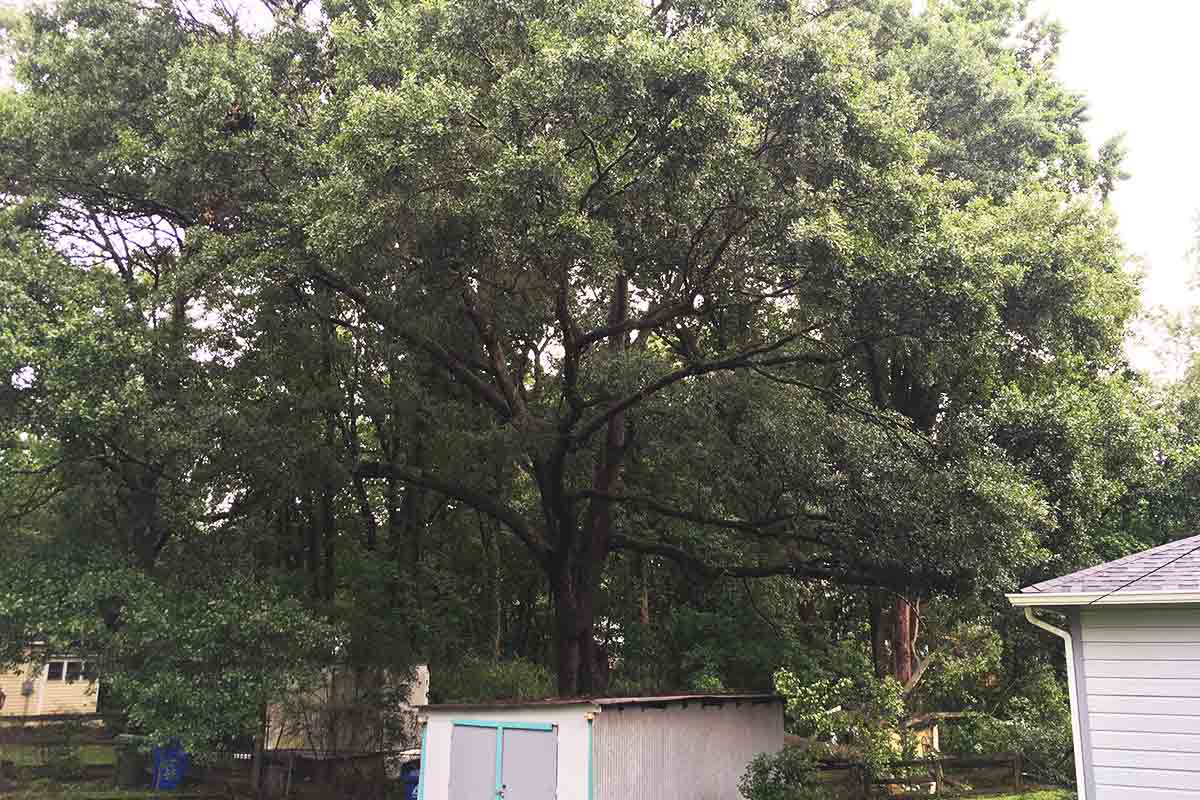 This is where we go off the rails from a typical fallen tree incident (and if you don’t like sad things, you should probably skip to the end).

Our tree didn’t fall over, nor did a branch simply break off. It split, leaving a gaping wound right down the middle of the oak. We have to decide to either take it down now or wait and see if it can survive and risk more falling limbs.

This tree is massive, mind you. Its branches give shade to the entirety of our backyard. It’s also one of the reasons why we bought the house to begin with. Even more devastating, our two-year-old son thinks it’s his tree. “Oh no! My tree fell down,” he said, as soon as he saw it.

Needless to say, it was a difficult subject to discuss with the professionals. “I’ve seen trees bounce back from worse,” the first guy assured me. “They’re resilient. And they want to survive.”

He was optimistic, if not cautiously so. The second guy, however…

“Sure,” he said. “It could last another 10 or 15 years. But with a wound that big, I don’t know if I’d bet on it. The bark is like a shield, and without it, bugs, fungus, disease, all kinds of things can get in and infect the tree.”

He looked at our roof. There were branches hanging over it, dancing in the wind. He looked back at the splintered trunk. “It’s growing toward your house as well. If it was further away, I would say you could let it stay and see what happens, but…” He hesitated to continue.

“I can’t make you to take it down,” he said. We had to decide that for ourselves.

The fate of the tree remains in limbo. Our neighbor’s yard is clean—free of debris at least—which means the first guy was right; they really could get it cleared away in a day. And we have another arborist coming out to see if the tree itself can be saved. I just hope, in due time, that I won’t be involved in Step 7: detailing the process and cost of having to take down a beloved tree.