A Beginner’s Guide to Canning

If you’ve spent the year cultivating your own vegetable garden, you have no doubt found yourself with an abundance of crops now that the growing season is over. After sharing your bounty with friends and family, you’re probably still going to have plenty left over to cook with.

To keep from throwing away fruits and vegetables that you may not be able to use in time, consider canning to preserve them. There are myriad recipes for jams and pickles out there, and with a few simple tools, you can get it done right in your own kitchen.

Canning is a way to preserve food in airtight containers. The process was invented by Nicolas Appert, a French chef who lived in the sixteenth century. The period was a time of political unrest in France, and the military was often called to arms. Food would spoil while in transit to soldiers, despite their best efforts to move it quickly from place to place.

In 1795, the French government offered a cash prize to anyone who could invent a way of reliably preserving food so that it could be transported across long distances. Appert took the challenge, experimenting for years until he figured out how to use heat to seal glass jars.

With the prize money, he opened a factory to mass-produce preserved food using his newly discovered method. While some changes have been made in the centuries since, the basic canning process remains the same. 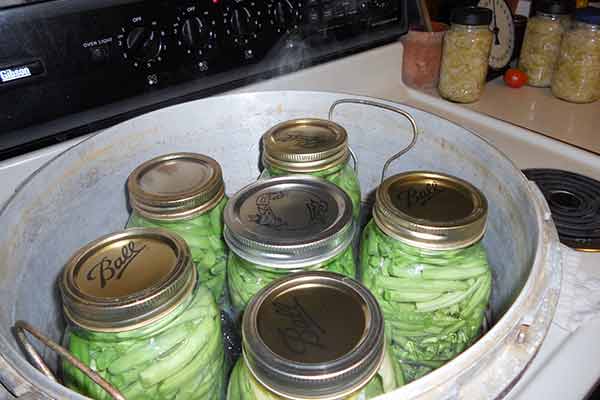 Water bath canning is best for preserving foods high in acid. Foods like pickles, relishes, jams, jellies, and salsas can be preserved using this method.

You’ll need jars, two-part canning lids, a jar lifter or other heavy-duty tongs to lift jars out of boiling water (do not use regular kitchen tongs), a widemouthed funnel, and most importantly, a pot that will hold enough water to completely submerge your jars (a stockpot should do the trick).

If you want to make sure you don’t forget anything, you can buy premade canning kits, which contain everything you need to get started.

First, create a rack at the bottom of your stockpot. Your goal is to elevate the jars of food slightly in order to allow water to circulate around them. You can use extra lid rings to create a rack, or you can use a silicone trivet.

Put your jars in the stockpot, and fill the pot and the jars with water. Cover the pot with a lid and boil the jars. Put the flat part of the lids (not the ring) into a small saucepan of water, and bring the water to a simmer. This will soften the bonding agent on the lids, which will eventually create the seal that will keep your food from becoming contaminated.

Once you are ready to fill the jars with food, carefully remove them from the boiling water, pouring the water back into the pot as you do so. Carefully fill your jars. Depending on the recipe you follow, you’ll want to leave some room at the top. Wipe the rim of the jar clean so that nothing interferes with the seal of the lid. Apply a flat lid, and screw a jar ring down over it to hold the lid down.

Lower the jars carefully back into the water. You may want to keep a heatproof measuring cup nearby in case you need to remove some of the hot water from the pot. Once the water returns to a boil, set the timer according to the recipe you are following. Different recipes require different boiling times. When the timer goes off, remove the jars from the pot, and set them on a clean towel on your counter.

The jar lids will make a pinging sound as the lids seal shut. The center of the lid will depress to show that the vacuum seal has taken hold. You should test the seal before you store your jars: Once the jars have cooled down, remove the ring, and lift the jar off the counter by the edge of the lid. The lid should hold tightly. 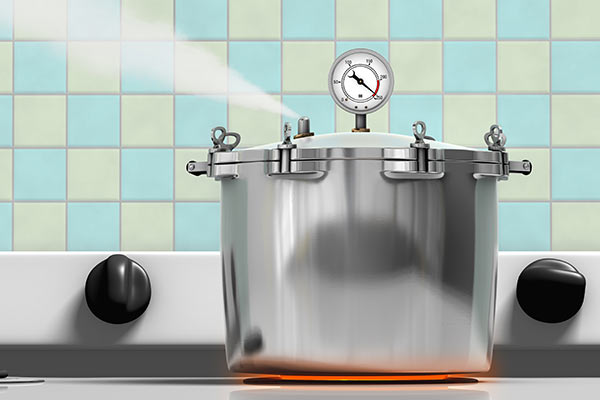 This canning method is best for low-acid foods. Preserving meats, soups, and vegetables is best done with pressure canning. To preserve food this way, you’ll need jars, lids, and rings just like you do for water bath canning, but you’ll also need a pressure canner.

Pressure canners look and behave a lot like pressure cookers. They come with lids that twist on and can be clamped down, and they are equipped with a vent pipe and a safety fuse. Most pressure canners come with a rack to keep your jars from touching the bottom.

To begin, heat your jars in hot water until you are ready to use them. This keeps them from breaking when they are filled with hot food. Fill your pressure canner with two to three inches of water, and bring the water to a simmer over medium-high heat.

Using a jar lifter, remove your hot jars from their simmering bath. Fill them carefully with your hot food, ensuring that you keep the rims of the jars clean. Place a flat canning lid on top of each jar, making sure that the sealing compound is firmly against the rim of the jar. Screw a ring on top to secure the lid. Repeat until you have placed all your jars inside the pressure canner.

Check that your water level is two to three inches high (or as specified by the manufacturer of the canner), and then lock the lid in place. Allow steam to escape from the vent pipe until the steam is coming steadily for at least ten minutes. This ensures that the canner is filled with steam, not air. Close the vent pipe according to the instructions provided by the manufacturer.

Watch the pressure gauge on your canner. Once the pressure reaches the appropriate level according to your recipe, start your timer. Regulate the heat under your canner to maintain a steady pressure throughout the process. Once your timer has gone off, turn off the heat, and allow the canner to cool down naturally.

When the pressure has completely come down, you can open the canner and remove the jars. Using a jar lifter, carefully place them on a clean towel on your counter to cool. Let them sit for 12 to 24 hours before testing the seal on the lids and storing the jars.