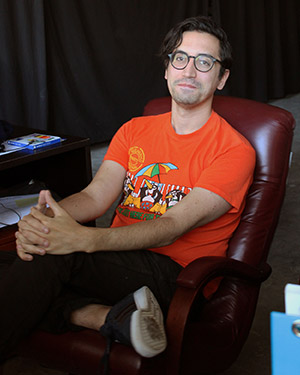 Well, initially, I was due to be a typist, the people who diligently work to transcribe every review the researchers capture. I had my phone interview, and it was determined that I talk too much, so the researcher position was more befitting of my skillset.

I’m a unique case because I’m the research coordinator; I oversee the team of researchers and occasionally still make the research calls myself. I’ve been with the company for roughly four and a half years. My favorite thing about what I’ve seen while here is how we’ve been able to provide a great atmosphere to any number of really interesting, talented people. This isn’t a conventional job, and it takes a certain amount of charisma (indeed, my background is as a musician). I’m glad to give other people who have that trait a stable job that helps them utilize what they have that may not be so important in more conventional positions elsewhere.

Well, you have to be able to talk. If you can talk, it’s the easiest job in the world. (There are, of course, plenty of people who do not find talking to the degree that we do so easy.) Beyond that, there’s a degree of charisma that’s necessary to really capture people’s attention on the phone, and you have to have the ability to maintain focus throughout long periods of people not picking up. If you’re the sort of person that can endure a long drive in a car with no stereo, I might have a job for you. There’s also a degree of resilience that’s necessary since not everyone’s going to get why we’re calling and may, in fact, be perturbed by the call. So I’m thrilled to say that everyone working under me is a very tenacious, strong-willed individual!

Everything. Seriously. I’m not a handy sort of person. I can restring a guitar and reformat my laptop’s hard drive, and that’s about as far as I go. Because of this job and the tons of categories we call about, I can now talk shop with people who have significant issues with their house: “Oh, you’re getting foundation repair work done? I know all about foundation repair.”

I’ve personally trained everyone who’s currently in the researcher position, and I more or less wrote the book on a lot of the processes we currently use.

I ran a vintage clothing store, I was a globe-trotting musician, and I worked in a psychologist’s office, administering tests to children that measured their brain activity while they played video games—there’s been a lot.

What advice would you give to new researchers?

I really like Jelly Belly jelly beans, so if they want to get on my good side right off the bat, it wouldn’t hurt to just happen to have some on their person and be willing to share.

What’s the one thing you can’t live without?

My cat, and the thing is, this also provides one of the major crises in my life since I don’t know if my cat feels the same way or if I’m just a means to an end for him. I’ve read a lot about cat psychology, and y’know, they just see us as big cats. We’re just roommates that walk on two feet instead of four. So I worry that I’m going to go on vacation and he’s not going to miss me, which bothers me.

What is the best book you have ever read?

I accidentally read 1984 when I was in fifth grade. It had a pretty big effect on me. I’m not particularly worried about government surveillance or dictators taking over to turn our society into a dystopian mess, but it did instill a healthy amount of skepticism in me toward the world around me—and also a sense that it could always be worse.

Would you rather be a tiny elephant or a giant hamster? Why?

A giant hamster. I feel like as a tiny elephant, even if you retained all the other physical attributes of the species simply scaled down to a minute degree, you’d still lack a lot of mobility and agility that you’re used to having. I like being able to jump if I need to, like if someone kicks a turtle shell at me at a high speed. Elephants can’t jump. Hamsters can at least scurry.

What is your hidden talent? 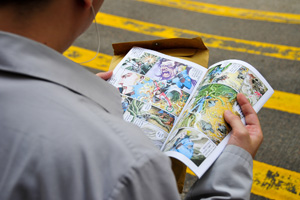 I have an encyclopedic knowledge of Marvel Comics dating from the late ‘60s to the early 2000s. It was my first major interest as a kid. My first dream job was comic artist, and no, I haven’t tried to draw anything since elementary school.

Where would you like to go on a dream vacation?

Detroit. I love Detroit. I spent two weeks hanging out there a few years ago, right in the middle of the most abandoned parts of the city. I wouldn’t raise a family there, but at the time, it was the most fun I’ve ever had. It’s the closest thing to being in the Wild West that exists today.

What is your personal philosophy?

“Be nice, and use your head.” I’ve got a lot of young relatives, and I’ve passed this along to them. It’s very simple—it gets the point across. I amend things as necessary, based on the person I’m telling this to, so sometimes “Be nice, use your head, and eat your vegetables” is used instead.

If you were stuck on an island, what three things would you bring? Why?

Pressure washing. My dad made me help him pressure wash his house the last time I visited him. It’s like if Rambo had a Super Soaker.

Jurassic Park. There is no other option. It’s like saying that the sky is blue or birds fly south for the winter. It just is. Please replace the “…you have ever seen” part with “…of all time, as agreed upon by humanity as a species?” We’re lying to ourselves when we attempt to introduce subjectivity into this question.

What are three things you MUST do in your lifetime?

I’ve already done all three. I’m just coasting now. Seriously, what else do you try to accomplish in your 20s?